I’m not insightful enough to be a movie critic.

Maybe I could be a food critic. These muffins taste bad. Or an art critic. That painting is bad.
~ Andy Bernard, The Office

I’d like to think I’m a bit more insightful than Andy Bernard. However, just in case I’m not, I won’t call what I’m about to present “criticism.” Besides, “criticism” just sounds so negative, doesn’t it? 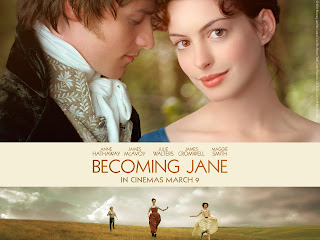 First – the movie. Smitty and I watched Becoming Jane on Friday. As I noted on Facebook, it made me glad to be born in 1978, not 1778. Without getting all spoilery on you, the movie is about Jane Austen and her romance with a poor but charming lawyer before becoming a published author. From what I’ve read, the movie is very loosely based on what may possibly be a true story. I took it for fiction and enjoyed it.

And reminded me that I am likely the only person alive who has not watched Pride and Prejudice. Or read it. How embarrassing.

Second – the book. Several months ago, I started hearing about this Christian vampire book. While I wasn’t interested in reading about vampires (sorry, Twilight fans), I was intrigued by the book’s back story. I learned that the author, John Olson, wrote his first novel only to be told by his future agent, “I wouldn’t touch that with a sixty foot pole.”

Thankfully for Olson and his readers, the Christian fiction market has changed since then. Shade was published last year, and I read it in January. If you like paranormal stuff – think Frank Peretti or Ted Dekker – you’ll like this one. Olson created a believable main character with authentic character quirks, and a creepy situation for her to face. I’m not sure the end was tied up as neatly as I prefer, but maybe that’s the point: life, especially when dealing with the paranormal, has loose ends and unanswered questions.

I recommend this book, as well as reading about the book’s own story here and here. 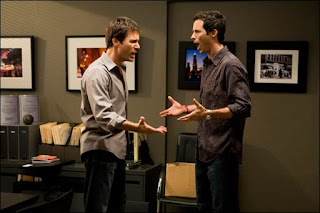 Third – the TV show. Ed was the first TV show that Mark and I got hooked on together. So it has special meaning for us. So much so that we call Tom Cavanaugh “Ed,” no matter what his character is named in any new show.

When we saw that our beloved “Ed” was starring in a new show on TNT, along with another funny guy who I still call by his TV name, Will (Eric McCormack for those of you who like to call people by their real names), we knew we had to watch it. Even better, it’s about advertising.

Trust Me aired its first episode last Monday; we watched it over the weekend. I laughed a lot, but mainly because I recognized the environment and the situations the characters found themselves in, thanks to my time in an ad agency. I think the show has potential, and I’m going to watch it again. Ed and Will are both talented, quick-witted and fast-talking actors – and I like that sort of thing. One warning, though: apparently, the FCC allows pretty, um, colorful language at 9 p.m. on a Monday night. Even that, though, was a realistic portrayal of the world the characters live and work in.

There you have it. A review for you, no matter what your preferred medium. Unless you prefer radio, and then I’ve got nothing.

Do you think you have what it takes to be a movie critic? Do you think it would be fun to be a food critic? Did you know four-letter words are allowed on cable after 9?