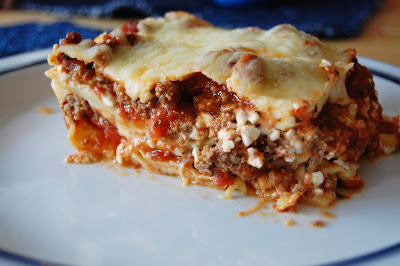 Last Christmas, I suggested that we have Italian for Christmas dinner with Mark’s family instead of the normal turkey and fixings. You know, the same elaborate meal we had (at three different family gatherings) a month before.

It’s not that I have anything against the traditional holiday meal. But for five adults, one picky kid and a toddler, a whole turkey carcass is a bit much.

I’m sorry. Is it wrong to say “carcass”? Believe me, I have nothing against meat. It’s the memory of turkey overload getting to me.

But anyway, Italian food is good. Specifically lasagne. Mark loves my lasagne. I’ve made it many a-time and have it pretty much down pat.

So of course, the logical thing to do would be to experiment with a new recipe.

I’d recently seen a recipe for lasagne on The Pioneer Woman Cooks. Ree called it the best lasagne ever, and more importantly, it looked easy enough to make.

Friends, I hope you don’t mind if I tell you: There was raving at that meal. Mark’s family loved the fancy lasagne.

And by fancy, I mean it has sausage and sliced mozzarella.

I made it for the second time this weekend, and it didn’t seem quite as good. But just now, I had leftovers for dinner and Oh. My. Goodness. It was delicious!

Thank you to the Pioneer Woman for what is, yes, the best lasagne ever.

You can find the recipe at Ree’s site, but I did make a few changes. I used no-boil noodles, half as much parsley, mild sausage instead of hot, and instead of sprinkling the grated Parmesan on top, I mixed it with the cottage cheese mixture. Then I topped the lasagne with shredded mozzarella and a little bit of shredded Parmesan.

This post is part of Mouthwatering Monday. It will also be linked to Ingredient Spotlight at Eat at Home Cooks.