It’s all about the chili.

When I was a kid, we didn’t go out to eat often. That’s partly because we lived in a small town that only opened a Subway and Sonic years after we moved away, and partly because there wasn’t a lot of extra money to go around.

But every once in a while, we’d go out for a special occasion. And more often than not, my family would go to Don Chilito’s, a little Mexican hole in the wall near my grandma and aunt’s houses (but about an hour away from our house).

My earliest memories of that restaurant aren’t about the food, but the décor. In the middle of the main seating area was a column that had three or four tables around it . . . and a huge fish tank on top!

Thinking back, I’m not quite sure why that fish tank was so exciting. But let me tell you, it was.

Later, after the restaurant had changed hands (but never names) once or twice, the fish tank disappeared and I became more interested in the food.

First, you should know that this cheap Mexican eatery serves their cheap Mexican food cafeteria style. You stand in line – sometimes all the way out to the double doors, where you can look at the bubble gum machine and wish you had a quarter – until you finally reach the counter. That’s when it’s time to pick up a tray and negotiate with your little brother: who’s going to get the paper napkins and who’s going to get the silverware?

Next, it’s time to order. My dad gets a taco salad. My brother gets a taco burger or tostada or nacho or something else that seems completely random to me. But my mom and me? We’re burrito fans. So we each get a Don’s burrito – beef and bean, chili and shredded cheese on top.

I don’t know why my mom decided that was her dish. But I’m pretty sure I decided it was mine simply because it was hers.

After getting your food, paying and filling up your cup with pop, it’s time to find a table. This is not nearly as exciting since the fish went away.

But before digging in, there’s one last thing you must do when eating at Don Chilito’s: get chips. Between the cash register and the bathrooms is the most glorious of Mexican restaurant finds: the chip bin. It’s a huge bin of tortilla chips, under lights, with two kinds of salsa that taste exactly the same. It’s chip and salsa heaven. [Insert singing angels here.]

And once you eat that burrito and all the chips, you might think the experience is over. But, no. There are still sopaipillas to be eaten. And they can be found . . . you guessed it . . . in the sopaipilla bin.

As I mentioned, my family didn’t have a lot of money for eating out. Plus, this slice of Mexican cuisine was located a solid hour from our house.

So we decided to make Don Chilito’s food at home.

I’ll keep this short: the sopaipillas were a disaster. But the burritos? After a couple tries, we mastered those suckers. Here’s what you do:

Take one large tortilla and spread refried beans in the middle. Then spoon taco meat on the beans and top with shredded lettuce. Roll it up, and cover in chili and shredded cheddar. Nuke it for a minute, and enjoy.

The key? The chili must come from a can. I’m sorry, I hate to say it, but it’s the truth. Don’t bother with your homemade, healthy, three-bean business. Just get the can, skim the grease off the top and pour it out. (Okay, to be honest, we heat ours on the stove first, but I wanted to make sure you get the picture.) 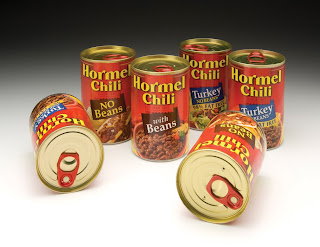 And that’s how you get cheap, greasy Mexican food at home.

Now, before you turn your nose up and assume that such a delicacy would not be good enough for your refined palate, I have to tell you that my family is not the only one who loves this food and this place. After all, despite the handful of owners over the years, Don Chilito’s has remained a staple in downtown Mission, Kansas.

And if you ask around, you’re sure to find more fans. I worked near the restaurant for a while, and several of my co-workers loved it. As did my friend that I met for lunch every couple of months. As do my cousins. Interestingly enough, even though our families both love this restaurant, I didn’t realize we had this in common until just a few years ago. Weird, right?

No, just the nature of the hole in the wall. After all, nobody brags about loving chili from a can.

What’s your favorite way to eat Mexican food? And in a handy coincidence, Rachel is making guacamole over at A Southern Fairytale. So head on over for her recipe and other Mouthwatering Monday tips!