I am not the poster child for Once a Month Cooking. 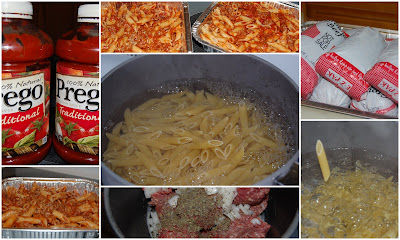 I can’t even begin to count how many times I have made a list of all the meals my family likes to eat, broken it down into ingredients and planned to make several of those meals ahead of time. I can, however, tell you how many times I’ve made a month’s worth of meals in one day to put in my freezer, and that is zero.

What’s that saying about a paved road and some good intentions and something?

Honestly, Once a Month Cooking is overwhelming to me. I’ve done the research, I’ve collected recipes, I’ve made my lists, I’ve even bought a package of about 50 foil pans (thank you, Sam’s Club). But when it comes down to picking a day to devote to cooking, I just can’t pull the trigger.

However, cooking a bunch of food every once in a while? That I can do. 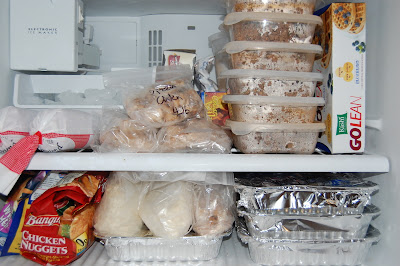 So here are the top 10 steps to giving up on perfect and cooking a lot of stuff in one day to have later down the road.

If you add my husband’s grilling time to the time I spent on this project, it’s a total of less than three hours. And here’s what I got out of it:
That’s about a dozen meals, plus leftovers. And once I use that last pound of hamburger to make some mini meatloaves for my daughter, I’ll have at least that many healthy meals for her, too.

Did I accomplish everything I put on the list this time? Um, no. For one, I didn’t bake a single muffin, even though I was totally prepared. 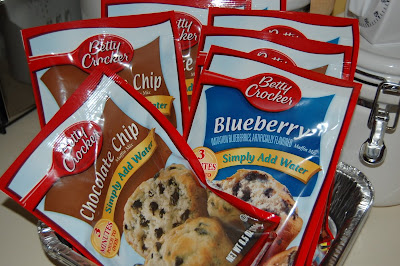 And for two, I didn’t make chicken spaghetti, macaroni and cheese or cheesy chicken casserole. Maybe next time. Because while spending three hours doesn’t yield a full meals for a month, it makes dinnertime at our house a lot easier. And who doesn’t like easier?

And let’s be honest here. If I have chopped up grilled chicken just a microwave minute away, then I don’t really have an excuse for eating half a bag of tortilla chips with Velveeta and salsa and calling it dinner, now do I?

Not that I would do that, of course…

For some yummy recipes that you don’t have to make in advance or in bulk, visit A Southern Fairytale.