Are you a good witch or a bad witch?

When I was a senior in high school, our drama department chose to put on The Wizard of Oz for our spring musical. I knew my friend Nikki would get the part of Dorothy (and yes, I was jealous), so I decided that I should be the Scarecrow.

Determined to get the part, I tracked down sheet music so I could practice at home and even came up with a few dance moves to accompany my singing. The range was high for my alto voice, but I gave it the old college try. Or, the old high school senior try.

But it wasn’t enough. When parts were assigned, I found myself playing Glinda the Good Witch. 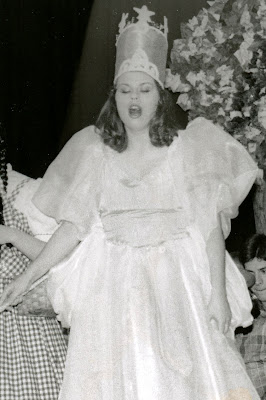 Hey – it might have been a small part, but I got into it!

I’d like to tell you that I got over that, but as I’m writing about it a dozen years later, that may not be true. Have I told you yet about Glinda’s costume?

It was pink. And poofy. And, if I remember correctly, glittery and shiny. 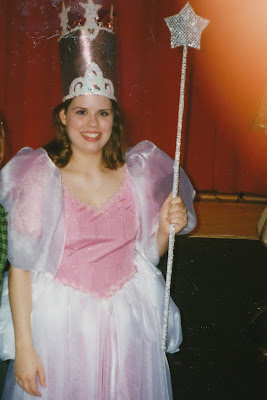 And did I mention that my lovely crown was too big?

But being a part of a musical or a play is always fun. That year was especially so, as some of my best friends had parts as well and my brother was the accompanist. I was also in drama class that year, so I got to help build the set, too. We had a blast. 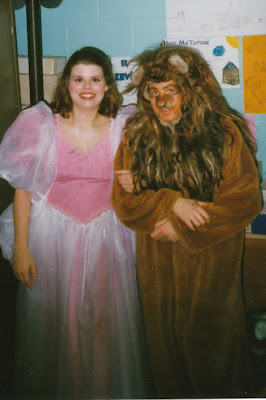 Smitty was the Cowardly Lion, and as usual, she stole the show!

Today marks the 70th anniversary of this great classic. And according to Chatting at the Sky (Oh, come on! You know I get my info from blogs.), The Wizard of Oz will be played in more than 400 theaters today in honor of that anniversary. You can check here to see a list of participating theaters.

Which character from The Wizard of Oz is your favorite?

Don’t feel obligated to pick Glinda. Although . . . I could arrange for a house to drop on you. What? Glinda couldn’t do that? Okay, well, I’ll wave my glittery wand at you; you know it takes forever to get that stuff out of your hair.