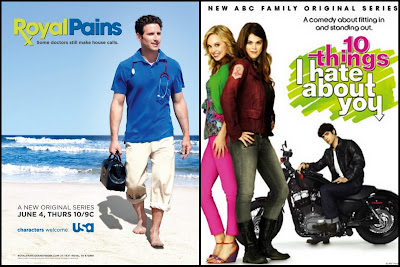 In hindsight I probably should have accomplished more this summer. After May sweeps came and went, I was left with little reason to sit on the couch, hypnotized by the black box in the corner.

I should have spent this abundance of free time cleaning. Or cooking healthy meals. Or – oh, speaking of health – working out. Or organizing my pantry. Or reading good books. Or something.

Now that I think about it . . . seriously, where did my summer go?

I’m not sure. I do know I’ve watched a lot of NCIS reruns, and I’m almost finished with season two of Arrested Development (thank you, Mr. Hulu). And, of course, there was my summer favorite: So You Think You Can Dance.

And, okay, so I spent plenty of time playing with Annalyn, reading a few of those good books and this little hobby I’ve found called blogging.

But I also found a couple of new shows to watch this summer. One is an hour-long medial dramedy and the other is a half-hour teen program. Both are funny, and both got decent reviews.

Royals Pains is about a New York City doctor who lost his job after making a choice the hospital board disagreed with. Somehow he ends up in the Hamptons, with his accountant brother, a beautiful and mysterious physician’s assistant, and a romantic prospect who works at the local hospital.

This show was on USA and scheduled right after Burn Notice (an all-time favorite at our house), but I didn’t watch it at first.

You know why? Because I didn’t need another show to watch. Hush.

I don’t remember when or why I started watching it, but I did and it turns out – I really liked it. The reviews I read were all based on the pilot, and many of them mentioned a great supporting cast but a weak lead. All I know is that in the later episodes, the entire cast was funny, quirky and interesting. And I wish I didn’t have to wait until next summer to see more.

(Although, honestly, I’m perfectly happy waiting, because the last thing I need is another Thursday night show in the rotation!)

10 Things I Hate About You, the TV show on ABC Family, is based on the movie of the same name. Which was based on Shakespeare’s Taming of the Shrew. And which starred Julia Stiles – who I love – and Heath Ledger – who the whole world seems to love. The show revolves around two very different sisters entering a new high school. Bianca is shallow and wishes only for popularity; Kat is headstrong and wishes for world peace.

You might not expect that a teeny bopper show on ABC Family would get good reviews, but it did. This show – which is too short at half an hour, if you ask me – has snappy dialogue, smart pop culture references and some more realistic elements than other fluffy teen shows. For example, when the girls throw a clichéd party when their dad goes out of town, they actually get caught by said dad.

[Side note: That really makes me think of Right Said Fred. You know the ones. What ever happened to them?]

Anyway. That snappy dialogue of which I speak? Well, you know it reminds me of my beloved Gilmore Girls. My favorite bit so far was when one sister said to the other (I’ll let you guess who said what to who): “Wow, you know this isn’t Sweet Valley High, right?”

Royals Pains is over for the season, and 10 Things airs its final episode next Tuesday. And while I’m sad to see them go, it’s kind of like saying goodbye to the carnival. It was fun while it lasted and you hope to see it again, but until then you might just have better things to do.

Now if you’ll excuse me, I’m sure I have a pantry to organize. Or something.