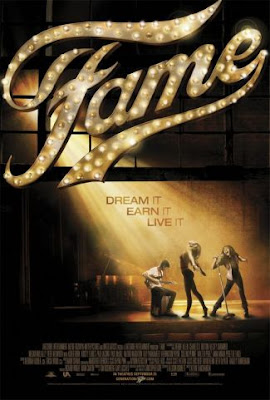 Two out of three of us are still sick in my house, so this will be short and sweet. Or, at least, short. (And you know that my version of short is less than 600 words, right?)

Smitty and I went to see Fame after Annalyn’s birthday party. We had pretty high expectations, as lovers of the teen dance genre, and that may have been the problem.

Here’s what I’ll say: If the goal of this movie was to illustrate the difficulties of a young artist’s life that we might not know about or think of, then they succeeded. It was filmed in a gritty way, so it seemed pretty obvious that viewers are supposed to feel like we’re getting a real look at the lives of these students.

But here’s the problem: The movie follows several characters over four years. In less than two hours. It was almost more of a montage than a movie – short clips of characters with no real development. I could hardly remember all the main characters’ names, much less care about what happened to them.

On the other hand, I’m a sap for teen dance movies. So the music, the dancing, the teeny-bopper romance? Totally made me grin (a little bit) and maybe even cry (a teeny tiny bit).

Also, Megan Mullally is awesome in everything she does. And now I’ve added another movie to my need-to-see list: the original. 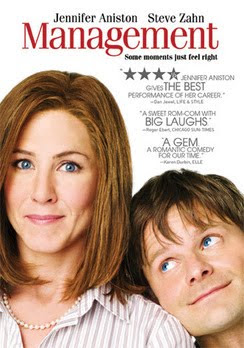 Mark and I rented Management a couple weeks ago. Redbox didn’t have any new movies out that we wanted to see, and Mark assumed that anything with Jennifer Aniston would be the kind of romantic comedy I like.

It wasn’t exactly the kind of romantic comedy I normally watch, though. It was about a romance of sorts, and it had funny parts. But it was very dry and not fast-paced.

The gist is this: Jennifer Aniston is a businesswoman who meets Steve Zahn on a business trip at the motel his parents own. He’s kind of nerdy and immature; she’s kind of overworked and lonely. He takes a fancy to Miss Aniston and ends up following her around the country, wearing her down until she . . . well, you don’t want to know the ending, do you?

Somehow it manages to be not really as stalker-ish as it sounds. Really, it’s pretty good. Quiet, but good. Oh, and it also has Woody Harrelson, so if that’s a draw, it has that going for it. 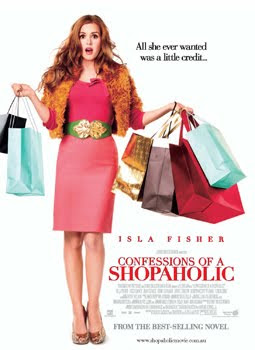 When Chelley visited several weeks ago, we rented Confessions of a Shopaholic. Chelley had already seen it and liked it, although she said the book’s different and better. I feel a little bad, because I didn’t really like it.

I think Isla Fisher is adorable, and there’s nothing better than a floppy-haired British romantic lead. (It turns out Hugh Grant was busy – or old – so they went with another Hugh, Hugh Dancy.) But the main character was real annoying to me. I’d like to think that people aren’t really that dumb, but maybe they are. So all I’ll say is that she isn’t the type of person I want to spend 104 minutes with.

Well, to be honest, it would probably be fun to go shopping with her. But to watch her try to dig herself out of the holes she’s dug herself? Not so much.

So – seen any good movies lately?