What happens when a "what if" comes true?

A few years ago, before I had even the desire to have a child, my mom said to me, “I’m worried that you are afraid to have a baby, because you’ve known so many people who have had trouble.”

I was so annoyed. Just because I knew a couple people who’d had difficulty starting families didn’t mean anything.

I mean, sure, there was my cousin who spent weeks on bedrest and my other cousin who went through years of fertility treatments in order to have children. Then there were my friends who’d had miscarriages and the girl I knew who almost bled to death during delivery. And, of course, there was my mom herself who lost a baby before I was born.

Okay, so maybe I did know a lot of people who’d had traumatic pregnancies and deliveries. And to top it off with the years I spent working around children with leukemia? Having a child was sounding pretty scary!

Mark gets so annoyed with me when I tell him all the possible ways Annalyn can get hurt. Or sick. Or . . . you know . . . worse.

But then I remind him that he’s not the one bombarded with information. I am! From magazines to books to blogs to friends, I’m constantly hearing stories and warnings and nightmares.

And I can’t help but think . . . what if? What if the worst thing possible happened? 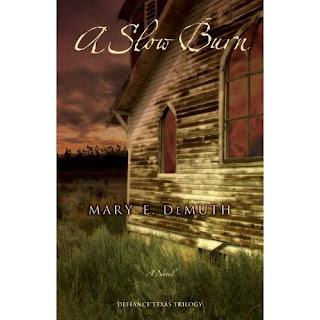 Mary DeMuth’s Defiance Texas Trilogy asks those same questions, and in A Slow Burn, the second book, Emory Chance’s “what if” nightmare has come true.

I read Daisy Chain, the first of the series, earlier this year. It was a hard book to read, an emotional punch in the gut more than once, but I’ve been looking forward to reading more of the story in the second book. Sometimes you just have to know what happens, even if you are covering your eyes the whole time you peer into the story.

A Slow Burn has finally been released, and you can read the first chapter online (and get hooked yourself).

Here’s a blurb about the book:

She touched Daisy’s shoulder. So cold. So hard. So unlike Daisy.

Yet so much like herself it made Emory shudder.

Burying her grief, Emory Chance is determined to find her daughter Daisy’s murderer—a man she saw in a flicker of a vision. But when the investigation hits every dead end, her despair escalates. As questions surrounding Daisy’s death continue to mount, Emory’s safety is shattered by the pursuit of a stranger, and she can’t shake the sickening fear that her own choices contributed to Daisy’s disappearance. Will she ever experience the peace her heart longs for?

The second book in the Defiance, Texas Trilogy, this suspenseful novel is about courageous love, the burden of regret, and bonds that never break. It is about the beauty and the pain of telling the truth. Most of all, it is about the power of forgiveness and what remains when shame no longer holds us captive.

“She can’t shake the sickening fear that her own choices contributed to Daisy’s disappearance.” I think this is the part that rocks me. Because I can only imagine – even though I don’t want to – how I’d feel if something happened to my own daughter. How I’d deal with that. How I’d face myself. How I’d live with myself – live with what happened, no matter what had happened – after that.

And the beauty of A Slow Burn is that it doesn’t just stop after answering the terrible question, “What if the worst thing possible happened?” It also answers the question of how you can go on living after it does.

How do you get over the “what ifs”?